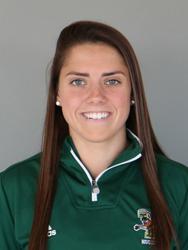 Ali is returning to the Organization after playing her senior year of high school with the Boston Shamrocks during the 2015-2016 season. Ali went on to play four years of Division 1 hockey at The University of Vermont. During her four years there, she was the Assistant Captain her Junior year and Captain of the team her Senior year. She majored in Business with a minor in Sports Management.

Ali is looking forward to giving back to the program that helped her accomplish her dreams of playing college hockey through working with the girls to develop them as both players and people and helping them identify and accomplish their goals.

At the age of thirteen, Coach Corl began training under Robert Rotondo. After six years of top on-ice instruction and player development, Molly received the opportunity to play for an elite junior women’s hockey team outside Toronto, then known as the Toronto Rattlers. After an extremely successful one-year stint with the Rattlers, Molly returned to New England to pursue her career at Saint Anselm College. Rotondo started the Boston Shamrocks in 2008, using Molly’s experience playing junior hockey in Toronto as a basis for the program’s design and implementation.

Corl had a very successful four-year career at St. Anselm College. While playing for the Hawks she was twice named the ECAC East Second All-Star for her outstanding defense. In her junior year she ranked second in the conference and seventh in the country in scoring for defenseman, with 7 goals and 18 assists for 25 points. In her senior season, Corl once again made the ECAC East Second-Team and was named to the ECAC All-Tournament Team for the ECAC Tournament.

Prior to joining the Shamrocks coaching staff, Corl lived and played in Prague, Czech Republic. While there, she played for HC Slavia Praha under the Czech National team coach and alongside many of the Czech National Team players. During the 2012-13 season, Corl had the opportunity to play throughout the Czech Republic as well as in Vienna, Austria and Oulu, Finland.  She was also named the top defenseman of the Champions League Tournament held in Vienna, Austria.

Corl joined the Shamrocks coaching staff in 2013, the inaugural season of the u16 team, and has enjoyed her role ever since. She has seen many players go on to college as well as move up to the u19 team and stay in the organization. Corl’s favorite part of the job is seeing the development of the players and team throughout the season and watching players reach their potentials.