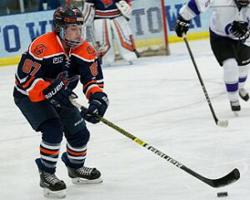 Santullo was an offensive force to be reckoned with all weekend long as her goal and three assists drove Utica to a UCHC weekend sweep against Chatham by scores of 5-0 and 6-1.  On Friday, the freshman assisted on goals in the first and third periods while on the ice for three goals in total and added four shots in the 5-0 win. On Saturday, Santullo opened the scoring with an excellent play as she powered through defenders on a drive to the net and buried the puck to put Utica up 1-0 in a 6-1 win. She also added an assist in the third period.

Santullo stands atop the team with nine total points on four goals and five assists in her first six games, and is among the national leaders among freshmen as her 1.50 points per game are tied for seventh in the nation.