THE BOSTON SHAMROCKS NEW PLAYER DEVELOPMENT MODEL IS TAKING HOLD, LAYING THE FOUNDATION TO HELP EVERY GIRL WITHIN THE ORGANIZATION ACHIEVE HER GOALS. 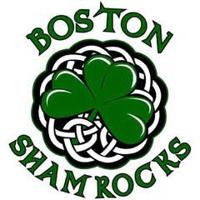 WILMINGTON, MA — For years, the Boston Shamrocks have been one of the preeminent girls’ hockey organization in the Northeast. But now, with the improvements made within the development side of the organization, the Shamrocks’ brass believe that they’ll be able to offer something only a select few organizations can when approaching the next generation of female hockey players.

They have top-of-the-line amenities within one of the best hockey facilities in the Northeast, Ristuccia Arena. For years, the Shamrocks boasted strong U19 and U16 girl’s teams and sent many girls to college to play hockey in the process.  That goal, the one to developing girl hockey players to be the best they can be, continues to be at the forefront of the Boston Shamrocks organization. To fulfill the goal, they’ve added to what Ristuccia Arena offers the players, increased ice time availability, and created a complex development program.

It started in the summer of 2018 when the Shamrocks announced the launch of their full-season U14 program. The Shamrocks now have the ability to fully develop a female hockey player from about age 12 onwards. It’s a major development in the girls’ hockey landscape in the northeast and one that sets the Shamrocks up to be at the forefront of it all.

“Our short-term goals are already in motion”, said U19 Head Coach Kristi Kehoe. “It started last year with the introduction of the U14 program and having that funnel players into the U16 program. Now, we’re focusing on player development and examining what more can be done at each level to create a better process. At the end of the day, we want to make sure that every girl that leaves this program to play college hockey is prepared for everything that experience will throw at her.”

The Shamrocks have always had player development be at the forefront of their activities, but with the introduction of the U14 program, they shifted gears as coaches and began really drilling down into what they envisioned would lay the foundation for the development funnel that they envisioned just a few months prior. To make that happen, they started designing programs for each team to work through. The U14s would work on certain skills that would make them good U16 players when the time came; the U16s would fine-tune those skills, but add additional layers to their games so that they would be effective at the U19 level; and the U19s would work to take their game to new heights, adding speed and physicality to their skills to prepare themselves for college hockey.

It’s not often that you hear coaches from a competitive team sport such as hockey say they weren’t focusing on wins and losses, but that was exactly the case with the Shamrocks early on this season. Given the brand new, top-to-bottom focus on the player development funnel, things had to be stripped down and built back up. The coaches had to buy into the system first, which they did over the summer as they were preparing for the upcoming season, then they had to present it in a way that had every girl, from age 12 to 19, buying in as well.

The individual on-ice results, according to the coaches, have been remarkable.  Oh man, our team has improved a lot since the start of the season”, said Kehoe. “We have a lot of talented players, but there are certainly things that were new to them: from shooting snap shots, to edge work and other small space situations, there was a learning curve. We have found that our team’s overall confidence and ability have improved. I would totally attest that to the focus on skill development. They have really pushed themselves, and it is paying off.”

“I have seen tremendous growth, not only with the players as individuals, but also with the team as a whole”, said U16 coach Molly Corl. “When we stick to our systems and play our game we can play with any team. It is very rewarding to see players that have had the making of good hockey players inside them all along, finally click and bring it together.”

And it’s not that the Shamrocks organization ditched winning games to focus on development, to the contrary, actually. It is more that winning comes after the players build their games mentally and physically.

“We do want to place an emphasis on winning games at the U19 level, but to us, it is more about creating mental toughness and building confidence that comes with being competitive. We also have high standards for our players as far as doing the little things right no matter the scoreboard”, said Kehoe. “We have emphasized ‘compete, quick transitions, and communication’. Those are the three things that need to be had on the ice every day, Constantly competing on every inch of the ice, moving the puck as quickly and efficiently as possible up the ice, and consistently being aware of what is happening in the game. We have felt if those three things could be done game in and game out, then we would have some solid hockey players on our hands. At the end of the day, those are level of expectations that will be placed on them when they get to college, and we want them to be ready to embrace those standards.”

A number of girls have, or will be making their college commitments in the coming weeks or months. Many Shamrocks’ alumni can be found on rosters throughout the NCAA. All signs point to a bright future for the Shamrocks and their players as they continue building out this model.

They already have the built-in luxury of calling Ristuccia Arena home. The former training facility of the Boston Bruins is one of the finest arenas in all of girls hockey and is on par or better than some college arenas as well. The teams have their own locker rooms, a dedicated study room, a film room, and gym. The ice is theirs almost as much as they want it, which many girls take advantage of when they are out of school or between classes in the case of some of the older girls.

“We are extremely fortunate to have an NHL caliber facility to train at. We have a full locker room (better than some college locker rooms to be honest), full weight room, film area, lounge, and academic area”, exclaimed Kehoe. “With all of this being in Ristuccia, our players have the ability to get better every day. There is no room for excuses with our full-time coaching staff and academic staff being there with them. We have an environment that gives these girls a college experience. Every player is prepared for what college will throw at them when they leave us.”

The full-time coaching staff works diligently to create opportunities for players to get better every day. They’ve put an emphasis on maximizing ice time between the teams and the players. At the U14 level, the girls average about three hours of practice a week, just enough to start skill development but not at an overwhelming level. But at the U16 and U19 levels, that number escalates. The U16s are at about five hours per week and the U19s are at seven hours per week.

All girls in the Shamrocks organization have the ability to come to the arena during the day for 1-on-1 work with coaches. This is mostly taken advantage of by the U19 team players, since they have more ability to be at the arena during the day as opposed to the younger players. The only caveat is that the players, any player, must have their school work done for the day.

The true effect of the player development funnel may not be realized for five years as the first set of U14 players works their way up into U19 players, but the Boston Shamrocks are off to a tantalizing start. They now have the complete package to offer to an aspiring girls hockey player and could soon be the premier destination in the Northeast for girls looking to work their way into a college commitment. Regardless of if that comes or not, there is one thing that the Shamrocks can almost guarantee: the girls will be ready for whatever that next step throws at them.

“We, the Boston Shamrocks, want to develop the complete person; student, athlete, and individual”, said Corl. “We would like to instill life skills and lessons into the girls to help them grow as both a player and as a person. Our ultimate goal is to help the girls achieve their goals, whatever they may be.”