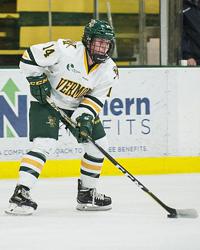 “This group really represents what is important to our program,” said Plumer. “[T]hey bring all of the qualities we want in a leadership group: work ethic, integrity, positivity, and on-ice performance. I am really looking forward to working with them next year and seeing our program take a step forward.”

An assistant captain last season, O’Leary enters her senior season having played in 105 games for the Catamounts. The Reading, Mass. native had six points in 33 games last season.  In 2015-16 she had eight goals and 14 assists for 22 points in 28 games with the Boston Shamrocks.  ESPNBoston.com named her “Miss Hockey” as the top female high school hockey player in Massachusetts.